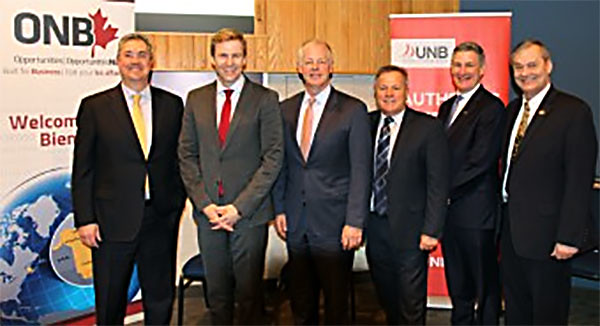 FREDERICTON (GNB) – IBM, a world leader in information technology and cybersecurity, is expanding its operations in New Brunswick, creating 100 new full-time jobs in the security division located in Fredericton over the next three years.

Gallant said New Brunswick is poised to leverage a strong foundation in information security and lead in this essential national priority. The province is already home to a natural cybersecurity cluster that dates back 25 years with the advancement of the broadband networks and establishment of Canada’s first faculty of computer science in Canada in 1989.

“This economic development investment will create a hub of information technology, security technology expertise and high-value jobs in New Brunswick,” said Dino Trevisani, president of IBM Canada. “Together, we are planting these economic development seeds to help transition New Brunswick into a knowledge-worker economy that can positively tackle huge challenges, such as the monumental growth of cybercrime, for the benefit of all Canadians and organizations worldwide.”

In 2011, IBM acquired Q1 Labs, whose QRadar Security Intelligence Platform was developed in partnership with the University of New Brunswick.

The acquisition served as a catalyst for IBM to form its security division, today a $2-billion business employing 7,500 researchers, developers and security experts in 36 locations worldwide.

IBM maintains a research development and customer support centre in Fredericton. It provides support for more than 5,000 customers around the globe.

The IBM Security QRadar analyzes data across an organization’s information technology infrastructure to identify potential security threats. It also serves as the “brains” of IBM’s 10 security operation centres around the globe. The technology is primarily designed, built, tested and supported out of New Brunswick.

MONCTON (NB) – BMM Testlabs, a leading gaming testing laboratory and technical consultancy, will create 1,000 full-time jobs in the Greater Moncton area.
Premier Brian Gallant and Martin Storm, president and CEO of BMM Testlabs, made the announcement today at the Capitol Theatre in Moncton.

“This is an historic announcement in terms of the number of jobs being created by the private sector in partnership with the New Brunswick government,” Gallant said. “We are proud to partner with BMM Testlabs in creating 1,000 new good-paying jobs for the province. This is a turning point for the province as we work to create more jobs for New Brunswickers in priority sectors, such as information technology.”

“BMM Testlabs is honoured to work closely with New Brunswick in this important initiative,” said Storm. “BMM looks forward to building on its already substantial business in Greater Moncton, as we consider the city an ideal location to grow our Canadian presence.”

BMM is the world’s longest-established and most experienced private independent gaming testing lab, providing professional technical and regulatory compliance services to the gaming industry since 1981. The company is headquartered in Las Vegas, NV, and employs about 300 people in 13 global locations serving more than 400 jurisdictions. BMM locations include Canada, Spain, Australia, South Africa and South America. Moncton is the company’s only location in Canada.

The 1,000 jobs that will be created during the next five years include quality assurance testers, engineers, computer scientists, business development managers and project managers.

The investment by the provincial government and company will contribute an estimated $75 million annually to New Brunswick’s gross domestic product once all the positions have been filled.

Opportunities NB is an action-oriented agency which seeks and supports high-growth opportunities to grow the New Brunswick economy and create jobs. It provides business support services for small and medium-sized, as well as large businesses across the province.

At its core, BMM is a systems-expert company that has provided consulting for and tested many of the largest gaming networks and systems over the last 33 years. In addition BMM has been successfully testing the full scope of Class III casino products for more than two decades.

A federal government television commercial touting a not yet existent Canada Job Grant was misleading and a breach of the Canadian Code of Advertising Standards, Canada’s advertising watchdog has ruled.

After reviewing the complaints, the council concluded the ad, which aired in May at prime time during the NHL playoffs and likely cost hundreds of thousands of dollars, indeed “omitted relevant information” contrary to the code.

But since the government withdrew the ad before the council hearing and promised it wouldn’t air in its “current form in the future,” the council said it would not identify the government in its next online “Ad Complaints Report.” The self-regulating body’s only remedy is to ask that an ad be changed or removed.

“The general impression conveyed by this commercial to council was that implementing this program was imminent; that the program would be in place immediately upon obtaining approval from only one level of government, the federal parliament. However, the program, which involves matching grants from employers and provinces/territories, requires prior agreement with, and buy-in from, those partners,” says the letter obtained by Postmedia News.

“In reality, the implementation of this program is not imminent, and the process of obtaining such agreement may well take a considerable length of time if, in fact, an accord with the provinces and territories is even possible.”