It is a common phenomenon in Canada and in all industrial nations to bust unions by any means necessary.

One of the major union-busting firms is AFIMAC according to their web site they have been successful in undermining union negotiations for many businesses and corporations including many Fortune 500 corporations. The city of Fredericton has hired AFIMAC to sabotage the negotiations process with union local 508. The issue is when did AFIMAC get involved with advising the city on what strategies to use against the union and supply replacement workers during the lockout. If consultations between the city started during or before negotiating with the union, that would imply that the decision for a lockout was made long before the notice of strike was given by local 508. If this is the case then the council has come forth with unclean hands.

This would not be the first time that the city of Fredericton has used underhanded tactics. They were sued for unlawfully dismantling the occupy camp, A successful lawsuit was launched by activist Julian Renault, where the city had to pay 15,000$ in damages to the plaintiffs. Another red face incident is when the council held a secret meeting to send a letter to Prime Minister Trudeau for support for the Pipeline. The city of Fredericton in attempts to shut social activist blogger/journalist Charles Leblanc by haveing google shut down his blog that failed because within six hours a blog went into production.

One has to question the credibility of the council.

The conflict between the city and the union is over 850,000$ spread over 4 years. The cost for the professional services of AFIMAC may well surpass 850,000$. The longer the lockout the more expensive it will be for the taxpaying Frederictonians.

On Tuesday I will be presenting the right to information to the New Brunswick Department of Transportation and infrastructure, the Department of Social Development and the City of Fredericton.

The reason for such action on my part is that there several conflicting stories behind the removal of the residents through the trespass act. The only way to get a clear understanding is to put all two departments and the city of Fredericton under the microscope.

When the story first broke it looks like it was the city of Fredericton that initiated the removal of the tent city dwellers, but the city of Fredericton said it was so, that it was the province and that the city was working on their behalf.  There was to notices the one in December was an advisory that the tent dwellers were to vacate the premises shortly before Christmas in the following Video Mayor Mike Clarifies what happened there and why the department of social services put a stop to it.

Charles Leblanc in the first video after the first advisor was given interviews with several members of “tent city” which gave a snapshot of what life is like living in a “tent city”. 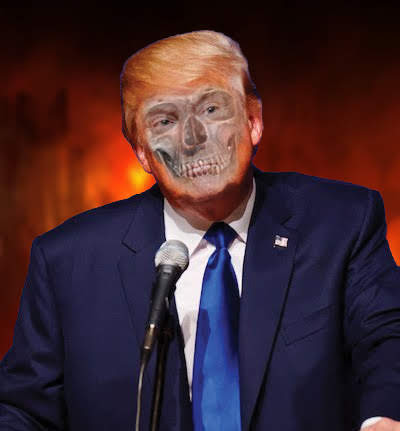 Trump, following the deadly assault on Iran, has changed. I noticed that he is now using teleprompters, I saw two types of eye behaviour that suggests that he is reading a prompter, one is the frequency that he squints his eyes, the other the scanning of the eyes. I suspect that he has been ordered to tone down. However, this is just an inference. What I think maybe going behind the senses is that his republican supporters have told, “If you don’t do what we tell you will vote for your removal of office.

One day, he threatens to obliterate their cherished cultural centers. Then next day tells the Iranians how great of a people they are how rich their culture is and that he is not going to target Iranian cultural centers. Yet, at the same time, impeached president Trump tells them that more sanctions are coming against them. However, these sanctions do not affect the ruling class of Iran, but it is the people of  Iran who end up suffering economically from the sanctions placed against them.

The only possible consequence of the sanctions levied against Iran is a revolt against the current Iranian regime blaming the regime for their economic hardships.

The revolts that that has recently taken place have demonstrated the consequence of past the prior sanctions and trade embargoes has had on Iran, for example, the price of fuel went beyond affordability for the average Iranian; they took out their frustrations on the government. So one can speculate that placing sanctions is get the Iranians to topple their government.  Should the Iranians take aggressive action against their elites, you can expect a deadly response from the elites, which if this is the case, then Trump accomplished his end game of destabilizing that country to advance the American economic interests.

Taking everything into account that has developed over the last several months. It appears that “Trump dude” is stacking the deck to ultimately have a favourable outcome for himself, enabling him to crush his upcoming impeachment trial and winning a second term at the oval office. A second term, he will be free to do as he pleases.

“The Times They Are a-Changin'” – Bob Dylan

Fredericton -Is it only the bad guys who use propaganda to persuade people to conform to their ideology, or is propaganda is all around us, the news, the billboard signs, advertisement, and so on?

If you look at the objectives of persuasion of the masses, you will see that all follow the same principles. What are these principles to persuade the masses? 1. Scarcity, 2. Consensus 3. Likability 4. Authority, 5. Reciprocity 6. Consistency. These are the six principles that Robert Cialdini put forth back in 1984. However, there is another principle that Cialdini never spoke about, and that is messages the elicits a strong emotional response either in support or against a given thought, which would be the seventh principle of persuasion.

Yet, we are constantly bombarded with messages that attempt to cater to our emotions, more so than our rationality when it comes to influencing our thoughts.

Edward Bernay, Sigmund Freud’s nephew understanding his uncle’s psychoanalytical theories, realized very well how the unconscious mind can be manipulated if the correct stimuli are applied to the human organic processing unit (the brain … lol). [Bernay is also known as the father of propaganda]

If we are unconscious of the forces that influence our thinking, then free will is just an illusion that the ruling elites manipulate to advance their power and control. Whether or not one accepts it, we are programmed right from birth and on.

The only defence is understanding the psychology and the sociology behind the schools of influence and persuasion, which interesting enough isn’t taught in school.

New Brunswick concedes that they cannot make a profit, the reason given is shortages and health Canada. Buyers of Canibus, like every other consumer, will mostly buy on price and the consistency of supply. The black market provides both, so, logically, they would grab the majority of the cannabis market.

The heavy taxation of tobacco, which was introduced by the Gallant government, isn’t working for the government as well. Because even though there has been a specialized team of law enforcers to curb the black market, the black market still dominates. So If the Higgs government is giving up on the cannabis because of loss of profit, then why doesn’t his government give up on the high taxes on cigs that are causing damage of tax revenue; as a result, loss of sales.