The People’s Alliance will seek to terminate the deal with Medavie to manage extramural care in the province.  With an added cost of $4 million annually as well as questionable management practices currently with Ambulance New Brunswick, the party is less than confident that exceptional service will be maintained under the proposed contract.  Additionally, this contract was not put to open tender and the public was not consulted, further eroding the trust citizens place in this government.  As such, the People’s Alliance would scrap this unfair deal and restore extramural care to what it is today – an exceptional public service that is well known for its high satisfaction among clients and patients.

The People’s Alliance is disappointed with the Gallant governments decision to create another crown corporation to sell marijuana at the exclusion of the private sector. Party leader Kris Austin stated, “Government should not be in the business of doing business. Government should be focused on healthcare, education, infrastructure and basic social programs, not booze and pot sales.” This latest announcement also contradicts Minister Rogers’ explanation on a recent political panel where she stated “The crown corporation will not be the retail model… the crown corporation will not be the distributor.” Yet based on today’s announcement, that is exactly what will take place. In the government news release Brian Harriman, NB Liquor CEO stated “NB Liquor is proud to have been chosen to be the retailer of recreational cannabis…”

The party is also concerned with potential pricing under this new system and the added cost to taxpayers. High marijuana prices will not eradicate the black market and will stifle the potential for economic growth in the private sector. Reasonable regulations and strong enforcement coupled with a private sector retail model that is taxed fairly is the best course to deter the black market, increase government revenue, and boost the economy.

In a room filled to capacity at a public town hall meeting held at the New Maryland Victoria Hall, party leader Kris Austin told those in attendance that New Brunswick is the only province in Canada that double taxes small business causing some of the smaller businesses with small profit margins to close their door placing their employees out of work. Additionally, the double tax scheme discourages out of province and local small businesses from choosing New Brunswick as a place to do business.

According to Austin, there would be some loss of revenue for the province by abandoning the double taxes, but that loss would be offset by tax revenues generated by a growing economy as result of the increase in the number of small business that would be created as a result of the tax change.

In his presentation, Austin stated that the office of the Language Commission should be scrapped because the office is creating a polarisation between the Anglo and Franco communities rather than binding the two communities. Austin questions the efficiency of that office saying that recently the current Commissioner of Official Languages Katherine d’Entremont has personally made complaints about violations of the language act. The monies saved by decommissioning the office of the Commissioner of Official Languages could go towards the Office of the Auditor General which according to Party leader Kris Austin is underfunded.

Recently the Auditor General Kim MacPherson criticised the provincial government Department of Social Development’s procurement process involving a $13 million consulting contract which cost the province more than what it was expected to save.

Austin explains that the Office of the Auditor General is an independent body to serve as a watchdog over government spending and by keeping that office underfunded it limits the ability of the General Auditor from performing an in-depth analysis of government financial management.

Austin adds, the people’s Alliance while critical of the Commission of the language commission is not anti-French or anti-bilingualism but the party is against the polarisation of the two communities. He went on to say that it is important to address the needs of both linguistic communities and that the People’s Alliance is in the process of translating their website into French, the mandate of the party is to be inclusive of every New Brunswicker.

Fredericton – The People’s Alliance is once again calling on the Gallant government to stop trimming the edges and to begin addressing the real issues with our fiscal challenges. For the past 10 years, both Liberal and Conservative governments have continued to run an annual operating deficit and increased the provincial debt nearly 3 fold. This puts individuals, families and our children’s future at great risk.

The 2017-2018 operating deficit is projected to be  $231 million, with the debt climbing to $13.9 billion next month which amounts to $18,600 per New Brunswicker.  Party leader Kris Austin says this is alarming.

“Until governments get serious about ending corporate welfare, and eliminating duality, the road to balanced books will never be traveled,” said Austin. “We cannot continue to see frontline services like education and healthcare cut while corporations are given tax payer handouts left and right.”

In their 2014 audited platform, the People’s Alliance revealed how New Brunswick can save hundreds of millions of dollars annually without affecting important front line services. The party has continued to press both Liberal and Tory governments to get NB Liquor out of the costly retail division (while maintaining wholesale and distribution), merge the two health authority administrations, and stop giving tax dollars to big business. By doing so, overall fees and taxes that are placed upon the shoulders of the provinces’ citizens could be reduced and the annual deficit eliminated. 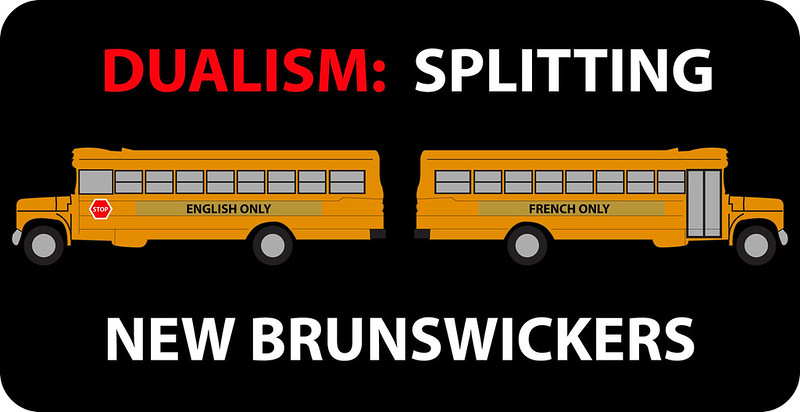 The leader of the People’s Alliance is pleased the Liberal government has abandoned its Court of Appeal case to segregate children on school buses based on which language they speak.

The government had sent the question of dual busing to the Appeals Court after it discovered an English school and a French school in Kent county were transporting kids together up until 2015. Then Education Minister Serge Rousselle put a stop to the practice and ordered extra buses for the area. Today however, the government decided, rather than continue the challenge, to allow local DEC s the ability to share school busing services if they should choose. DEC s are made up of representatives and parents.

Under section 23 of the Charter of Rights and Freedoms it gives minority groups the right to govern their own schools, and subsections of the constitution guarantee education to be controlled individually by each official language group.

“I respect the right of teaching our children in their mother tongue, french or english here in the province” says Kris Austin, “ We are all equal partners, with common goals to make New Brunswick the best possible place to raise our families.”

Austin is critical of how the government handled the situation, which he called a lack of leadership from within the ranks.

“After spending thousands in tax dollars to file application, months tying up the court, and wasting the resources of various organizations, the government has decided to abandon the dual bus question,” says Austin, “Premier Gallant could have saved a lot of time and money by doing what many parents were asking and allowing educational districts to decide for themselves the best way to transport students to school, without ever involving the court. It shows a clear lack of leadership by the Premier which is unfortunate for taxpayers.”