What is Harper so afraid of? Canadians? Stephen Harper travel agenda is so secretive that mainstream media do not know where he will be until hours before Harpers arrival. Fredericton blogger Charles Leblanc announced Harper’s arrival to Fredericton long before local media announced his arrival.

When Harper’s bus arrived at the Fredericton Legion, he had an entourage of security vehicles and personnel. RCMP suited in military battle suits; each equipped to engage in an all-out war.

Has Harper’s mental state deteriorated to such a point where he has become delusional believing that everyone is out to get him. Fear is a dangerous thing; it can make people behave in irrational ways.

There is on empirical evidence that suggest that Canada is at greater risk of foreign terrorist attacks then there has been in the past. His fears are all make believe. Since the likely hood of external attacks are highly unlikely, then he must fear his fellow Canadians. Maybe he is suffering from the Julius Caesar complex “being murdered by one’s one”.
As well if one recalls: Gaius Julius Caesar was a Roman statesman, general and notable author of Latin prose. He played a critical role in the events that led to the demise of the Roman Republic. Is Harper following Caesar’s footsteps? 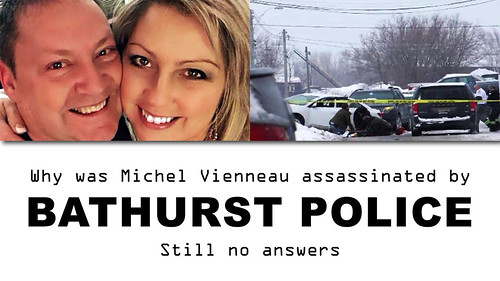 Within 24 hours of the shooting, the Nova Scotia RCMP were called to investigate the killing of Vienneau.
On July 16, the Nova Scotia RCMP announced that it completed its investigation into the matter, and has forwarded the file to the New Brunswick public prosecutions services to determine whether any charges against the officers will be laid.

Clandestine and secrecy has been the running theme throughout this investigation which is the opposite to when a civilian shoots a police officer. When it’s a civilian who does the shooting the name of the suspect or the names of the suspects are normally made public.

The Bathurst Police and the RCMP have refused to release the names of the officers involved in the shooting or release any information regarding the investigation.

Recently, Dawson Creek RCMP fatally injured protester hacktivist James Daniel McIntyre under questionable circumstance. Like the Vienneau incident, the identity of the officer involved is being withheld from the public.

We are all aware that some police can be placed in a situation where the likely hood of the officer being fatally injured is a likely outcome and they have to take immediate action to protect themselves and others by  taking a human life. However, that was not the case in Dawson Creek British Columbia. An unidentified RCMP officer gunned down anonymous hackavist, 48-year-old James Daniel McIntyre in cold blood.

McIntryre wearing the Guy Fawkes mask was protesting at a public meeting held at the Fixx Urban Grill restaurant against the Site C dam, which is to be built this summer by BC Hydro, a Canadian utility company.

According to eyewitness reports there was another individual creating a disturbance in the restaurant, which was the original reason to why the RCMP was called in the first place. By the time the RCMP arrived, that individual had left. The RCMP later admitted that the man that they killed was not the man involved in the disturbance during a meeting about a planned controversial dam that is to be built.

The reason given to why the RCMP officer killed McIntryre is that he would not surrender the knife that he had in his possession when demanded by the officer. Given the distances between McIntyre and the Officer, the officer life was not in immediate danger. The only Statement that the RCMP has given to this date is; “There was a confrontation”, whatever that means.

This not the first time that police are involved in questionable shootings. In January of 2015, Bathurst Police shot Michel Vienneau without giving any reasons to the shooting. Vienneau’s wife Annick Basque told the media, that the Bathurst police shot the wrong man.

When the Nova Scotia RCMP were asked by media personnel if they would release the results of the investigation they refused to answer the question, it is now seven months later and no one knows anything about the facts and circumstances surrounding the police killing of Michel Vienneau.

When police do well, they should be recognized for the good that they do, but when they do something in error, they should accept the responsibility and the consequences of their actions.

Saturday – July 18, 2015 4:00 PM ET At approximately 6:30 PM PT on July 17, 2015 at an Anonymous protest in Dawson Creek, British Columbia which the RCMP was informed about in advance, an RCMP officer mercilessly shot and killed a masked Anon without provocation or cause. The situation should have been handled according to Treaty 8 protocols. And, if Canadian police were as brave as Canadian nurses, they could deal with people with knives without hiding behind bullets. This is the fourth Anon to be slain by security forces around the world in as many years. Turkey, Egypt, Palestine and now British Columbia in Canada. As in the past, Anonymous will not stand idly by while our own are cut down in mask. Anonymous has fought for the lives of protesters all over the globe, from Tahir Square in Egypt to Ferguson, Missouri. We will most certainly avenge one of our own when they are cut down in the streets while protesting the earth wrecking environmental policies of the Canadian government.

To this end Anonymous announces the launch of Operation Anon Down. The focus of this Op going forward will be gaining justice (and vengeance if necessary) for our fallen comrade in Dawson Creek. But we will also memorialize our previously slain brethren, and prepare to take action for future Anons killed by police – as we have no doubt they will cut down more of us.

To begin we will identify the RCMP officer involved, thoroughly dox him – and release that dox on the Internet. Because the world has a right to know every detail about killer cops. We will offer support and raise funds if necessary to cover the burial expenses of our fallen comrade. He will be buried with the honor and dignity that his courage has earned him. We will ensure that he is never forgotten, and takes his place in the growing ledger of brave Anonymous martyrs around the world. Then we will press the RCMP and Canadian government for justice. This RCMP officer must be named, fired, and charged – for the murder of our brother Anon. And if we do not receive justice, rest assured there will be revenge.

We call upon our fellow Anons in Canada to take to the streets and protest at the RCMP headquarters in every Province, every day – until our demands for justice are met. We call upon the Global Collective of Anonymous and allied crews to remove the RCMP cyber infrastructure from the Internet. March, create and sign petitions, hack, dox. We may not be able to bring back our fallen comrade, we may not even be able to prevent other Anons from being slain by murderous police – but we can sure as hell show them that there will be a steep price to pay when they kill us.

My wife and I are the two people Justice Richard Mosley was referring to when he ruled CSIS was end running the law. We have been following this decision very closely, we are being spied on right here in Canada. My wife and I and our 3 children have been abused by the RCMP CSIS CSEC and other police forces in Ontario and British Columbia for over 5 years now.

I have a mental disability and the police started harassing my family and I when I started using Craigslist 5 years ago, what can I say, we’re swingers. My wife slept with a few of them while I watched. We are not terrorist! It sounds strange but I have been poisoned and my wife has been poisoned for speaking out publicly about the abuse. We have also been assaulted numerous times in the last 5 years.

END_OF_DOCUMENT_TOKEN_TO_BE_REPLACED

Should the conflict between the protectors of the environment and those who want to contaminate the ecosystem for profit escalate to a war like confrontation RCMP trained snipers are on standby to use any means necessary to take control should the need arise.

Issuing the court injunction and the enforcement of the injunction is a recipe for disaster. The reason given why the injunction was upheld was because of threats made to the private security firm Industrial Securities which is own by the Irving Conglomerate, so in this respect the injunction served to indirectly protect the interest of Irvings’ and the interest of injunction applicant, SWN. So why go through this expense to move ahead with the exploration, the answer may lie in that the returns are going to be greater then the costs. What is not known at this time are the results of the previous exploration efforts that has been done in the province, one can speculate that the results must be favourable for the industry, why else would they continue exploration at the increased expense created by the protestors?

The Province, SWN an others who have a vested interest in developing the shale gas industry have no choice but to use aggressive tactics to dismantle the protestors who are trying to protect the environment to do anything otherwise would mean a loss of authority and legitimacy, so they will do everything in their power to keep control of the situation, even if it means mass arrests, deploying rubber bullets, tear gas and even killing people.

This not a protest in the classical sense of what a protest is, rather it is a group of people made of both native and non native who are committed to the preservation of the water supply and preventing any any other catastrophic consequences that may result from hydraulic fracturing. While at the same time you have a group Government, Industry whose position is diametrically opposite of those who’s passion is to save the environment. The consequence of the two extreme position is that no compromise between the two can be reached to resolve the problem at hand. The only logical outcome between the two is war like confrontation and clashes will continue until one of the sides wins the shale gas war, The best strategy for the protectors is to conduct themselves in such a way that the costs for the province and the industry exceeds the financial returns of shale gas extraction at that point it will no longer be feasible to pursue exploration and the eventual extraction.