What is all the huff about? The Canada east pipeline project at least for the time being. That has caused a problem for Alberta, because at the moment for all practical reasons Alberta is landlocked to get its bitumen out to the European Market.

While the Canada East pipeline project was a lost, the focus is on Kinder Morgan’s Trans Mountain Expansion Project, which when completed would allow bitumen to reach the European Markets.

In anticipation of protests against the Trans Mountain Expansion Project, Kinder Morgan has successfully attained an injunction to prevent protestors to protest with a certain distance of its gates and operation. Alberta in a Trumpian style has threatened BC that if they also prevent the pipeline from crossing their border, Alberta will place trade sanctions against British Columbia (BC). That’s real Canadian like eh! Province pitted against province.

On Friday, March 23, 2018, Green Party Leader Elizabeth May and NDP MP Kennedy Stewart along with a hundred others arrested and placed into custody for breaching a court-imposed protest-free zone.

At this time it is not known if at this time if the charges of civil contempt have been withdrawn against May and Stewart.

If so much of the public wealth was not being streamed into the offshore pockets of our invisible absentee landlord/plantation-owner Irving oligarchs, there’d be a *LOT* more to go around for the rest of the population of our poor province.

Allowing the Irvings to dominate the thoughts of the public with their media monopoly and allowing them not only to be the main private employer but also the top private provider of services to the government, means that they have both the people and government of New Brunswick in a vice grip that they can tighten at will, till they get whatever they want.

To date, the only prospect of turning this around appears to be coming from the Green Party in terms of the preservation and proper stewardship of our public resources as well as the termination of the wanton poisoning of the province with Monsanto RoundUp, which will likely be rearing its head as a leading cause of cancer among children in the next generation.

I think there might be a chance for change if the Greens and the New Democratic Party worked together after the NDP ever recovers from its pro-Irving stealth takeover by OIL-igarch sleeper agent Dominic Cardy, who showed his true colors by defecting to the Irving’s long-time preferred Conservative Party after capturing the NDP leadership(!)… which defection constituted a jump from the left of the political spectrum to the opposite extreme, that he executed as if he were merely changing an ice cream order from chocolate to vanilla… (in fact, even such a change would have been harder to make for my kids!)

A bit of background research reveals a long personal friendship between Cardy and one of the Irving oligarch clan’s sons. It is not a reach beyond the imagination that they might have sat down together one night on an IRVING OIL-igarch family yacht off the Bahamas over a couple of glasses of Moosehead beer and said to each other, “Hey, why don’t we eliminate one of the two potential threats to the Irving empire by taking over the weak and unprotected New Democratic Party (the traditional party of organized labor) in order to divide and conquer a potential LABOR-GREEN alliance that could eventually have the capacity to dethrone the Irvings.

The fact is that Cardy was a Washington-trained agent of empire, who worked for NDI the Democratic Party’s branch of the US global control mechanism that is headed by hate-monger Madeleine Albright (remember her? the woman who screamed “Disgusting Serbs, get out!” in Prague). The step down in salary and status by Cardy from being an international imperial agent to rural eastern Canada suggests to me that his return to Canadian politics after working against Russia means Washington was intent on extending its tentacles by taking direct control over political affairs in Canada after already providing the political campaign foot-soldiers to parachute former Conservative Prime Minister Stephen Harper into national office from Alberta’s alt-right, and after training the current prime minister, a son of former anti-American Prime Minister Pierre Trudeau (Justin), and then locking up the entire political spectrum by injecting Albright’s stars-and-stripes “bot” Cardy in to take over the NDP in New Brunswick and then have him go federal… which would have given Washington a three-strikes “You’re out, Canadians!” takeover of the country’s entire political system.

Thank God for the Green Party of Canada, a group the US has surely infiltrated with a few FAKE-DREADLOCK imposters, but which they cannot yet co-opt!

NDP Leader Tom Mulcair committed to helping Edmonton with needed investments to infrastructure and transit aimed at reducing congestion. With thousands of fewer vehicles on the road, the NDP plan will support business needs, improve productivity and keep the city moving.

“Stephen Harper’s lost decade has left cities with a vision for transit, like Edmonton, with inadequate funding and complicated red-tape that delays progress and holds municipalities back,” said Mulcair. “The NDP’s plan will provide Edmonton with significant stable and predictable federal infrastructure funding to support its long-term transit needs.”

By year four, the NDP’s plan will create 54,000 construction, manufacturing and transit operations jobs across the country and add $4.5 billion to Canada’s GDP annually.

“Our plan will let Edmonton implement its entire light rail transit plan by investing an estimated $2 billion in new funding in the Edmonton Capital Region over the next 20-years,” said Mulcair. “Unlike Justin Trudeau’s reckless promise of years of deficits, the NDP’s commitment increases investment sustainably each year to grow the economy while balancing the budget.” 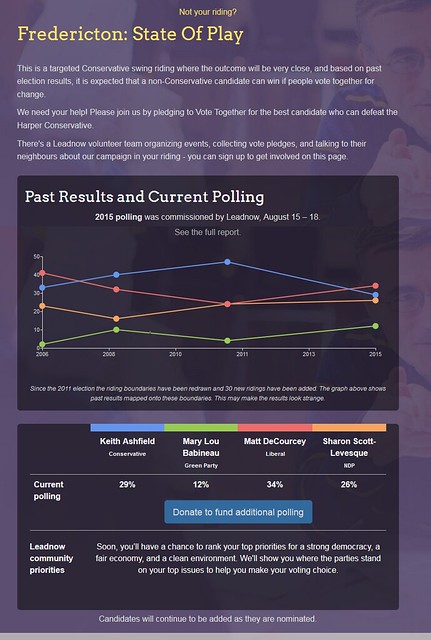 Reform/Conservatives sinking fast. Liberals in the lead, very close race between NDP and Conservatives. This riding has the potential of become an NDP Liberal race.

The Candidates are in alphabetical order by party:

Two thirds of Liberals and NDP wants a Coalition if Harper forms a minority. Trudeau explains why he says no to Coalition and his primary focus is on his plans for economical growth.