Stocks hit lows not seen in more than a decade

Monday was a tough day for the oil and gas industry on global stock markets.

In early trading on Monday, the price of some stocks hit levels not seen in 15 years. Stock markets around the globe suffered huge losses, although some were able to rebound. 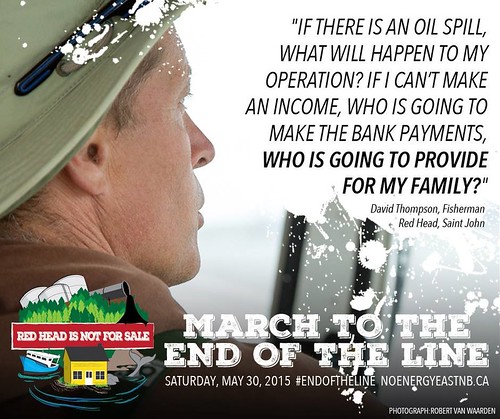 Who: The Red Head Anthony’s Cove Preservation Association (RHACPA) is calling on all New Brunswickers to join them in a peaceful march to raise awareness about the Energy East project.

Featured speakers include Lynaya Astephen and Leanne Sutton of the RHACPA, Ron Tremblay and Russ Leticia of the Peace and Friendship Alliance, Maria Recchia of Fundy North Fisherman’s Association, Stephen Drost of CUPE; and Mark D’Arcy of Council of Canadians as well as representatives from Quebec and Maine involved in the successful campaign against the planned Energy East Cacouna port and the South Portland local ordinance against tar sands exports.

What: The event begins at 1:00 p.m. with a 2.5 km walk. Participants will carry banners with the names of local rivers or bays they want protected from the risks of pipeline and tanker spills. The march ends at the beach where a flotilla of canoes and kayaks will meet them, carrying local residents and Indigenous representatives from throughout the province.

A smoke ceremony will be followed by the presentation of a Water Declaration to protect waterways and the Bay of Fundy on behalf of the Peace and Friendship Alliance, representing non-governmental groups and Indigenous peoples from New Brunswick, Nova Scotia, and Maine.

Participants will then form a human chain along the beach, a “Line in the Sand” to stop the Energy East pipeline and the expansion of the tar sands. Speeches will be followed by family-friendly activities including a barbecue, music performances, and an evening beach bonfire.

Where: Intersection of Hewitt Rd and Red Head Rd

Why: Passing through over 300 local waterways, TransCanada’s 1.1 million barrel per day Energy East pipeline project proposes a 150-hectare oil tank storage facility and a new deep sea water port that will serve at least 115 tankers exporting 1 to 2 million barrels of oil each – all in the rural community of Red Head, near Saint John.

Local residents are concerned about the impacts on their community, their economy, marine wildlife including endangered North Atlantic right whales, air quality, as well as the very real risk of catastrophic spills and emergencies in Red Head and the Bay of Fundy.

Energy East would carry diluted bitumen which has been proven to sink when spilled, making it more expensive and nearly impossible to fully clean up. One federal study found it sank and formed tar balls in marine conditions such as those in the iconic Bay of Fundy. Filling the export pipeline would allow an almost 40% increase in tar sands production and would generate more pollution than any single Atlantic province currently emits.

Economics, business and politics is just one big game where all the players involved are playing to win, each playing their individual strategies to get the maximum payoff from the game they are playing. According to game theory there isn’t anything wrong by playing strategic games. However, there are limitations to strategic game playing. The problem which can arise from such games is when one of the players sets themselves to have total control of the game and develops a dominant strategy that guarantees them the maximum payoff at the expense of the other players. 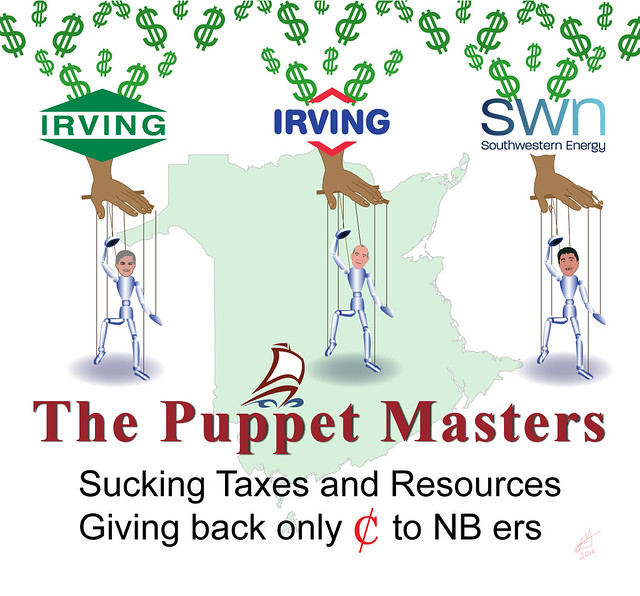 Irving is one of those players that has achieved supreme dominancy in the province of New Brunswick. There are other big players who are native to New Brunswick, such as the McCain’s, and the Ganong brothers. What distinguishes these two players from the Irvings is the focus of their business, which is not to control every aspect of the provinces economics. The Irving’s on the other hand have played their chessboard over the years which has allowed them to take control of almost every aspect of the economics of New Brunswick, they have taken control of the forestry resource, the petroleum resource, the infrastructure, plus created child companies to support their core parent companies, so much for the free market.

END_OF_DOCUMENT_TOKEN_TO_BE_REPLACED

It brought Lehman Brothers’ collapse and Northern Rock’s run, now Syria, the Fed Reserve and G20 are among new flashpoints

September is a dangerous month. Five years ago this month, Lehman Brothers went belly-up. Twelve months earlier there was the run on Northern Rock. Black Wednesday in September 1992 saw Britain’s departure from the exchange rate mechanism; the pound left the gold standard in September 1931.

The signs are that September 2013 will also be an interesting month. That’s interesting as in scary. There are five potential flashpoints: Syria, the G20 summit, emerging markets, the Federal Reserve meeting to discuss scaling down the US stimulus, and the German election. Any one of them has the potential to damage the global economy. END_OF_DOCUMENT_TOKEN_TO_BE_REPLACED