Halifax, N.S. – On Friday, May 6, Canadian Labour Congress President Hassan Yussuff will speak at a noon rally for the 57 Striking Herald workers, who have been on the picket line for over 100 days.

Nova Scotia Federation of Labour President Danny Cavanagh says the province-wide support for the members of the Halifax Typographical Union has been solid since day one.

“A true example of the solidarity happened last week when members of CUPE Nova Scotia and the Nova Scotia Nurses’ Union (NSNU) raised over $12,000 and $13,000 respectively for the strikers at their annual meetings.

“These very generous donations from convention delegates are just part of the overwhelming support these 57 strikers have from the labour movement. Every day workers stop by the picket line to walk with workers, donate gift cards, buy coffee or make their own donations,” says Cavanagh.

NSNU President Janet Hazelton says her members were happy to pass the hat at their convention raising over $13,000 in support of striking HTU newsroom workers.

“This small group is standing up so that women in the workplace are paid the same as a man. To see struggling workers standing up for what they believe in is a powerful thing,” says Hazelton.

Newly elected CUPE Nova Scotia President Nan McFadgen says that the CUPE activists that attended convention heard from the Halifax Typographical Union strikers and also passed the hat. McFadgen says CUPE and its members stand solidly behind any workers on strike in our province.

“When workers defend their rights against an employer who has cut wages, undercut seniority and creates an environment that does not support a union, we will stand with them in solidarity. When unions are strong we make everyone strong,” says McFadgen.

“The Nova Scotia Federation of Labour and its 70,000 members have a message for the owner and management of the Chronicle Herald – if they think they can freeze or starve the unionized workers out or bust the union, they are sadly mistaken,” says Cavanagh.

Journalists, photographers and editors at the Chronicle Herald newspaper (represented by CWA Canada’s Halifax Typographical Union) have been on strike for more than 100 days at this time. Rally THIS FRIDAY May 6th for these striking workers!

Support Striking Members of the Halifax Typographical Union!
RALLY FOR THE STRIKING NEWSROOM WORKERS AT THE CHRONICLE HERALD

Nurses union and support gather to demonstrate outside the NS legislature to protest the health care budget. 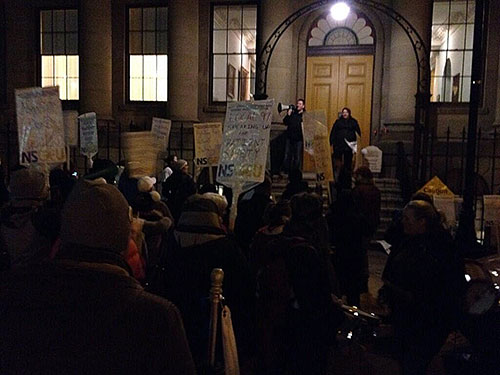 (Reuters) – South Africa’s National Union of Mineworkers said on Friday it had agreed to a deal for wage hikes of up to 12 percent with the construction industry, ending a three-week strike.

“This is a major victory for us,” union official Issac Ntshangase said in a statement.

The strike in the construction industry, one of several in a number of sectors, had appeared to have a relatively small impact, with many workers refusing to heed union demands to down tools and many building sites remaining active.

Workers in the motor and gold industries have returned to work after strikes that crippled operations at some of the country’s biggest producers were resolved last week.

With the unemployment rate stuck at about 25 percent for years and poverty gripping millions, many South Africans have said they are more concerned with securing a paycheque than heeding the strike calls of union bosses.

Tunisian workers and youth shut down the North African country on July 26, when the largest trade union federation and other political organizations held a general strike. The actions were in response to the July 25 assassination of Popular Front leftist politician, Mohamed Brahmi, 58, who was shot 14 times outside his home near the capital of Tunis.

Brahmi, a member of the legislative, 217-member National Constituent Assembly, is the second left political figure to be assassinated. In February, Chokri Belaid was murdered, also outside his home. Tunisia Minister of the Interior Lofti Ben Jeddou reported that both leaders were killed with the same weapon.

The general strike on July 26 and the funeral of Brahmi on July 27 brought out hundreds of thousands of people who expressed their opposition to the current government dominated by the moderate-Islamist Ennahda party. Demonstrations were held in the capital, Tunis, as well as the southern mining areas at Gafsa and the town of Sidi Bouzid, the birthplace of the uprising in December 2010, which spread across the country and led to the forced removal of longtime Western-allied president, Zine al-Abidine Ben Ali.

Initiated by the General Union of Tunisian Labor (UGTT), the leading trade union alliance, the work stoppage and demonstrations were held under the theme of stopping “terrorism, violence and murders.” Thousands gathered outside the UGTT headquarters on July 26, planning to march down the city’s main street to the Interior Ministry building when they were attacked by riot police using teargas.

In Sidi Bouzid, demonstrators threw firebombs at the headquarters of the Ennahda party. The sister of the slain politician Chhiba Brahmi pointed her finger at the Ennahda party as being responsible for the assassination. “I accuse Ennahda. It was them who killed him.”

Similar accusations were made in February in the aftermath of the killing of Belaid.
END_OF_DOCUMENT_TOKEN_TO_BE_REPLACED