In a room filled to capacity at a public town hall meeting held at the New Maryland Victoria Hall, party leader Kris Austin told those in attendance that New Brunswick is the only province in Canada that double taxes small business causing some of the smaller businesses with small profit margins to close their door placing their employees out of work. Additionally, the double tax scheme discourages out of province and local small businesses from choosing New Brunswick as a place to do business.

According to Austin, there would be some loss of revenue for the province by abandoning the double taxes, but that loss would be offset by tax revenues generated by a growing economy as result of the increase in the number of small business that would be created as a result of the tax change.

In his presentation, Austin stated that the office of the Language Commission should be scrapped because the office is creating a polarisation between the Anglo and Franco communities rather than binding the two communities. Austin questions the efficiency of that office saying that recently the current Commissioner of Official Languages Katherine d’Entremont has personally made complaints about violations of the language act. The monies saved by decommissioning the office of the Commissioner of Official Languages could go towards the Office of the Auditor General which according to Party leader Kris Austin is underfunded.

Recently the Auditor General Kim MacPherson criticised the provincial government Department of Social Development’s procurement process involving a $13 million consulting contract which cost the province more than what it was expected to save.

Austin explains that the Office of the Auditor General is an independent body to serve as a watchdog over government spending and by keeping that office underfunded it limits the ability of the General Auditor from performing an in-depth analysis of government financial management.

Austin adds, the people’s Alliance while critical of the Commission of the language commission is not anti-French or anti-bilingualism but the party is against the polarisation of the two communities. He went on to say that it is important to address the needs of both linguistic communities and that the People’s Alliance is in the process of translating their website into French, the mandate of the party is to be inclusive of every New Brunswicker.

The Trudeau government during their election campaign promised that 2015 would be the last year for “First past the post” elections the likely hood of that promise being honoured is now being questioned.

At a rally that coincided with the Fredericton Liberal Riding Association general annual meeting where Liberal MP Matt DeCourcey for Fredericton was scheduled to speak was held.

Upon his arrival, he was greeted by 40 to 60 people representing concerned citizens and various organisations of the riding about the Liberal government backing away from their election promise to dispose of the first past the post electoral system.

DeCourcey explained that from the government’s point of view there is no consensus among the Canadian people for an electoral change. According to DeCourcey, he believes that someday we will see a change in the electoral system, but right now is not the time. 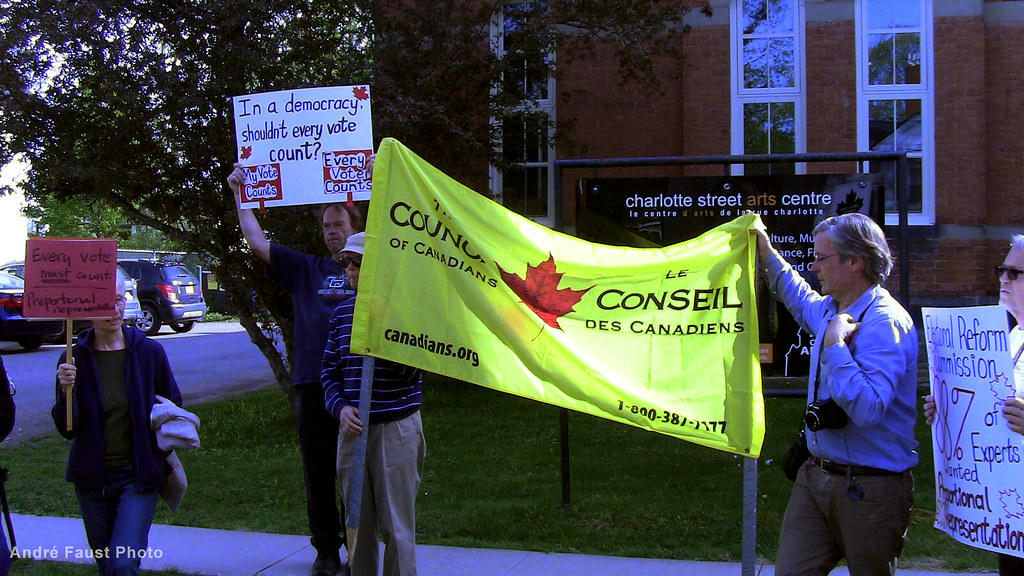 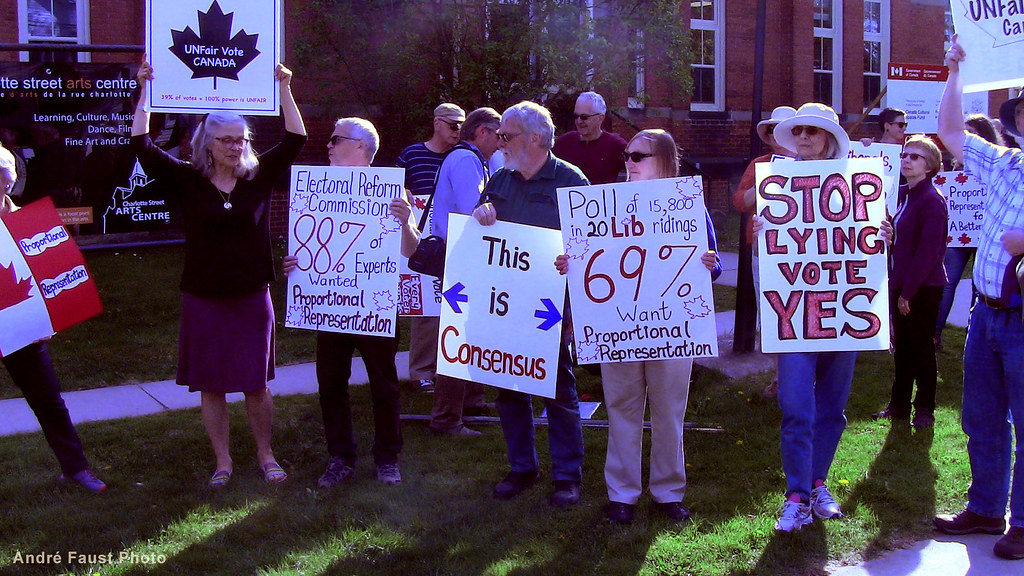 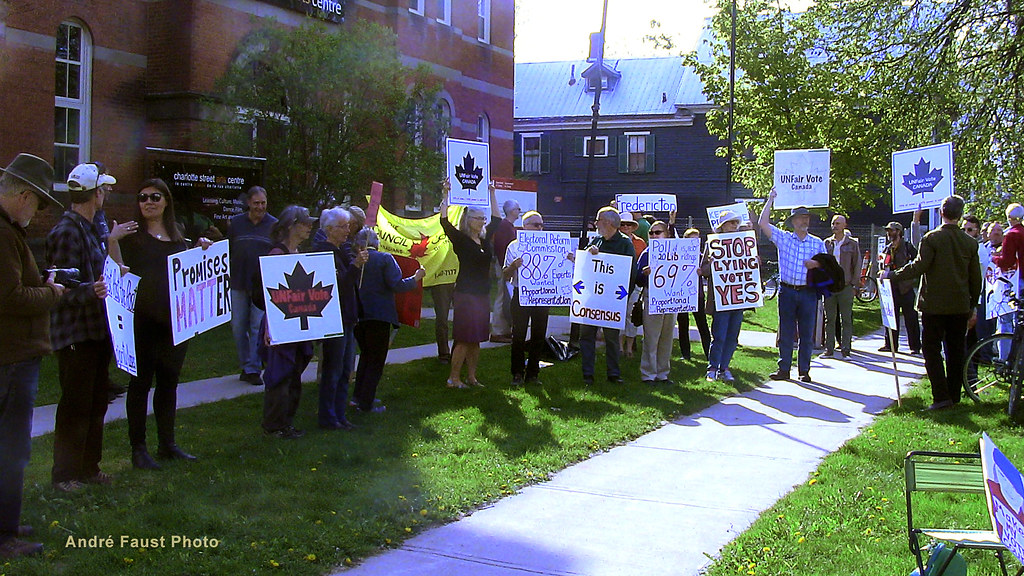 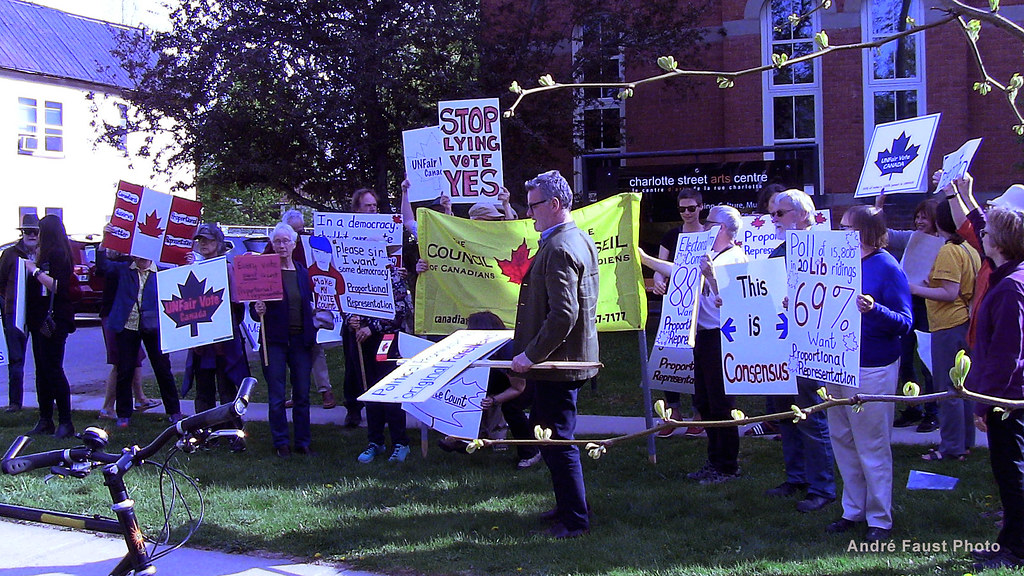 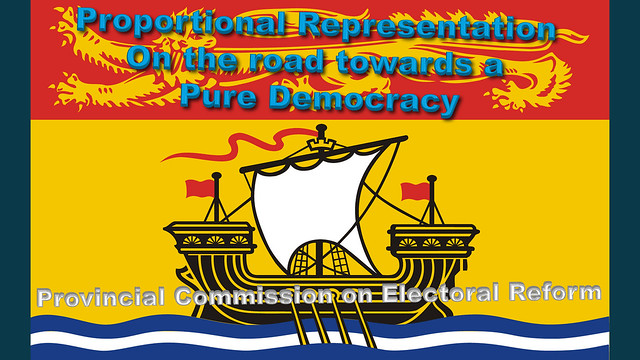 Presentation to the NB Commission on Electoral Reform, January 23, 2017

Thank you for the opportunity to present this evening. I am sure you have grown weary hearing presenters speak to the narrow focus of your charge; therefore I will speak to the reasons you must get on with recommending that proportional representation be immediately implemented in New Brunswick.

My reasons are five-fold:

1. I believe that the current first past the post system attracts (generally) poor candidates. There are exceptions, of course. But the system seems to appeal to the personality that is most prone to serving himself over others. We are saddled consistently with egocentrics and people with intense corporate connections and interests to serve. A mixed member proportional representation system would be more welcoming to average citizens with no special interests to benefit from the fact of being in public office.

2. Poor candidates lead to incompetent ministers and poor decisions. Witness the Atcon fiasco, brought about solely by elected MLAs who to this day remain in our government cabinet. Straitjacketed by the two-party system, whole regions of NB that are not on the inside of a Conservative or Liberal Registered District Association are shut out of the electoral process. Proportional Representation would allow more parties, more viewpoints, and hopefully, but not assuredly, better candidates to enter the race for public office.

3. Our current system is hollowing out the civil service. It’s hard to go to work every day wanting to do the right thing as suggested by science and evidence, only to be told by a co-opted Minister to develop a policy or program that serves a business or economic ideology, and in practice will result in adverse impacts. When you don’t see your values reflected in your work that is a recipe for suffering—by you, your family and most of all, your work. Right now one department has a motto that has arisen because of Ministerial incompetence, that is, “Loyalty over honesty.” I’ll let that sink in for a moment.

4. Your committee has discussed civics education for students who, I would argue, should be given the vote at age 16. I propose this education be extended to incoming MLAs. This would include extensive coaching on the Public Trust Doctrine (which is the principle that certain natural and cultural resources are preserved for public use, and that the government owns and must protect and maintain these resources for the public good.) AND their personal fiduciary duty to the public of NB in the management of these “resources.” Fiduciary duty, if taken seriously in NB, would not be allowing the NB government to lose many hundreds of millions of dollars on the so-called “management” of our Crown lands, also known as unceded Wolastoq territory. The Auditor General in her 2015 report has shown the government to be ignoring its fiduciary duty to the public and its biggest asset—the Crown forest– in its pandering to unsustainable industry.

5. Finally, in addition to recommending proportional representation be undertaken in NB, I would recommend your commission require changes to the NB Civil Service Act in order to address some of the shortcomings of our politicians and bureaucrats. One might think this Act would be the place to enshrine some of the selfless, universal principles of looking out for the public good and taking care of the commons for the prosperity of all but no, this isn’t the case. The Act is all about secrecy and keeping information out of the hands of the public. It is disgraceful and an embarrassment to New Brunswick. Its overhaul should be part of a major push for electoral reform—one that properly educates MLAs in how they are expected to conduct themselves while in the People’s House, and throughout their terms in office. 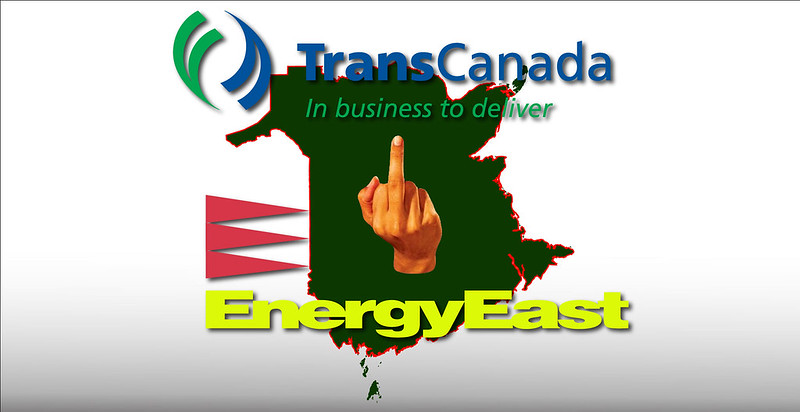 The propaganda never stops, TransCanada Pipeline and Canada East have invaded social media to persuade public opinion that the pipeline is the magic bullet that is going to pull New Brunswick out of bowels of depth to a have province that will be the of the rest of Canada.

What they don’t tell you is that on average there is 3 major critical malfunctions in the pipeline per year that has cause major environmental damage, and billions of tax payers money to clean up their mess.

What they do tell you is the 100 of thousands a jobs that the construction of the pipeline will create, If those numbers are correct they are not going to be New Brunswick Jobs, that not to say that they will be a few jobs created in New Brunswick to construct the pipeline, a few contractors will stand to make good dollars in the short term, the bulk of the jobs will go to Alberta, possibly Ontario.

There will be a few jobs created at the Irving terminal, but the number of jobs are not going to be significant enough to really effect the New Brunswick Economy. At the end of the project there will be two Winners, Alberta because they will be able to get their land locked bitumen to world Market via the Irving terminal, and Irving. For the rest of us we won’t see much a change in the quality of life.

Currently the Liberal Government has already created more jobs in the province then what the pipeline could create, early indicators are that this tread is going to continue.
According to Fredericton Mayor Mike O’Brien, the population of Fredericton is expected to reach 100,000 by non-pipeline jobs by the year 2035. That is just Fredericton. The rest of New Brunswick is expecting to see significant population growth as well.

We are moving in the direction to depend less on getting energy from fossil fuels, which really is an inefficient use of that resource. Oil is not only used for energy but it is chemical base for many of our products as well. So let’s save our oil for our products, Oil, natural gas and so on is a finite resource that has trap the suns energy. With our current science and physics we still can’t produce artificial oil.

What taken the earth millions of years to create we can consume it in several hundred years if we keep using fossil fuel as a primary source for energy.

Currently it is either Hibernia or Sable island, it one of those two that is going to run out of natural gas in less than five years.

When they come knocking to our doors trying to bullshit us about this magic bullet, we know what finger to use to express thyself.